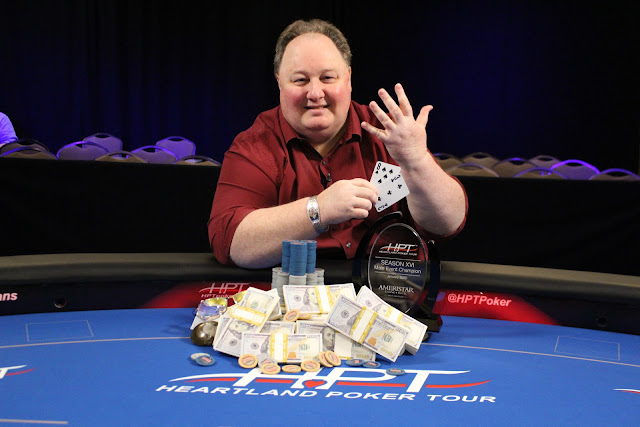 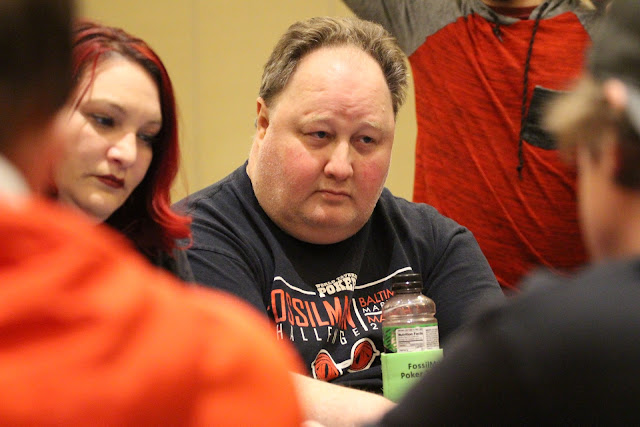 The final nine players in the $1,650 Main Event from Ameristar East Chicago will take their seats at noon today to play down to a winner. You can watch the table on a short delay at twitch.tv/hptpoker. Here's the story on the final table as told by PokerNews' Brandon Temple:
The HPT Ameristar East Chicago $1,650 Main Event started with 520 entrants, but today, the final table of nine will converge at Noon local time in the ballroom inside the beautiful Ameristar East Chicago Casino. The final table, which will be filmed for future television broadcast, will also be streamed on the HPT's Twitch channel on a short delay, with the PokerNews blog coverage syncing with the stream.
All nine players have already locked up a five-figure payday of $14,906, but they'll all be vying for the top prize of $171,411. To go along with that whopping sum of money, the victor will also receive a $3,500 Championship Package towards the HPT Season XVI Championship Event, and 140 Player of the Year Points, giving whoever takes this final table down an early lead in the HPT's Player of the Year Leaderboard.
Greg Raymer already owns four HPT Main Event titles, all in 2012 when he won the HPT's Player of the Year race. A win in today's event would propel him into third on the HPT's All-Time Money list, with Craig Casino and Reginald "Shawn" Roberts the only left to top. With the second-biggest chip count at 2,275,000, he's put himself in prime position to add another notch to an already remarkable poker career.
Even Bethyo comes into play with the chip lead at 3,355,000, and will be looking to ride to momentum from an outstanding Day 2 to earn his first HPT title. David "The Maven" Gutfreund, who has an HPT title of his own from 2014's HPT Soaring Eagle Casino and Resort Main Event, sits with 1,520,000 and will be looking to cross the $1 million marker in lifetime tournament earnings today, which he would achieve with a runner-up or better performance.
Rounding out the field are a mix of locals to the region, as six of the final table members are from Illinois, while a seventh, Dale Hackney, hails from nearby Michigan. The average stack sits at a hair over 57 big blinds, meaning these nine players should have plenty of play as they grind their way down to a champion.
Click HERE for more chip counts and more information.
Posted by korey729 at 9:46:00 AM No comments: 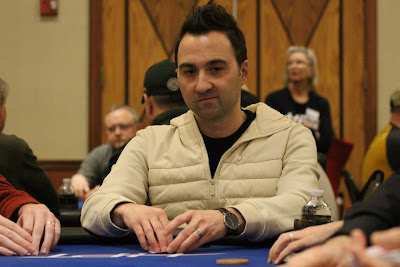 The third and final flight of the $1,650 Main Event from Ameristar East Chicago is underway. The first two flights drew 269 total entries. For a recap of the first two flights, or to follow along with the action the rest of the way, head to PokerNews.com. Here's a recap of Day 1b action as told by Brandon Temple of PokerNews:

Day 1b of the HPT Ameristar East Chicago $1,650 Main Event brought 172 more entrants out for a full day of poker action. Combined with the 97 entrants in yesterday's Day 1a flight, a total of 269 entrants have participated in the Main Event, with the projected biggest flight, Day 1c, slated for tomorrow.
After fifteen levels of play, Edward Blazer put 463,000 chips in the bag for Day 2, giving him the overall chip lead after two flights. Blazer, who spent much of the day at or near the top of the counts, was a constant force in the tournament, but his surge truly began in Level 7 (200/500/500), when he rivered a six-high straight and won a six-figure pot off an opponent with an inferior straight. Blazer kept his name in the top two or three in chips for most of the rest of the day, and ended up as the man to beat in the standings.
Right on his tail is last year's champ Nick Davidson (430,000), who had a mini heater of his own in the later levels, catching hand after hand and sending scores of foes to the rail. "We're on fire," he said at one point, and with the second largest stack after two flights, it's hard to argue against Davidson, who will be looking to go back to back and notch another HPT Ameristar East Chicago trophy for his coffers.
The rest of the top five include Peter Palanca (359,000), Roger Campbell (347,000), and Brian Dewindt (344,000). Joining them to Day 2 are Bradley Beetz (191,000), Donald Shaver (141,000), Mike Shin (116,000), and former HPT Player of the Year and WSOP Main Event champ Greg Raymer (82,000).
Paul Bianchi, who won the Season XV HPT $2,500 Championship last month in St. Louis, was unable to hit a big draw against Todd Ivens to bust. Chicago pro Ravi Raghavan succumbed to Davidson in Level 14 when Raghavan's king-queen couldn't catch up to Davidson's ace-jack.
Others who were unable to end the day with chips include Mike O'Neill, Hamid Izadi, former HPT Player of the Year Aaron Johnson, Event #1: $350 NLH Monster Stack champ Nicola Ditrapani, and Rich Alsup.
The final starting flight for the Main Event will kick off at Noon local time on Saturday. Players will receive 30,000 in tournament chips, and registration and a single re-entry option are available for players until after the dinner break after Level 9, or approximately 7:30 p.m. local time.
Be sure to tune in to PokerNews tomorrow, as we finalize the field for Sunday's Day 2 here at Ameristar East Chicago.
Posted by korey729 at 11:26:00 AM No comments: 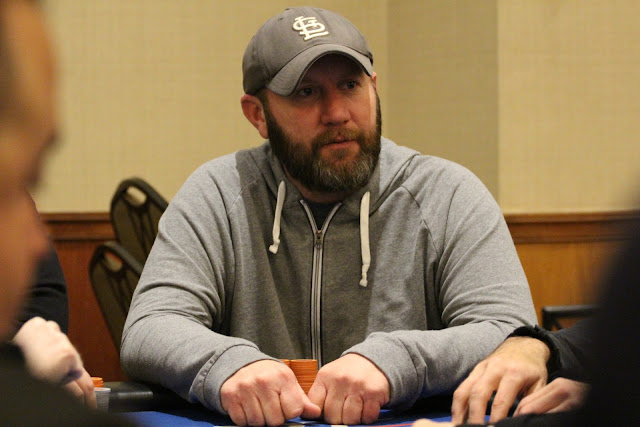 Day 1b of the $1,650 Main Event from Ameristar East Chicago is happening today. Follow along with all of the action at PokerNews.com. Here's a recap of yesterday's flight, as told by PokerNews' Brandon Temple:
A total of 97 players hit the felt for Day 1a of the HPT Ameristar East Chicago $1,650 Main Event, and after fifteen levels of play, just 16 remained, with Robert Keeling and his 422,000 stack leading the survivors.
Keeling's climb to the top came with some good fortune, as he found himself all-in and well behind early in Level 14 (1,500/3,000/3,000). He had his last 150,000 or so in chips in preflop with pocket nines, but Michael Banducci, who spent most of the day atop the counts, held aces. Luckily for Keeling, a nine on the flop sent a more than 100 big blind pot his way, and he kept the momentum going all the way to the Day 1a chip lead.
The rest of the top three includes Andy Ernstein (383,000) and Henry Zou (322,000), while Niel Mittelman (200,000), WSOP Bracelet winner Alex Ziskin (148,000), Kevin Maahs (83,000) and Michael VanderWoude (70,000) all managed to end the night with chips for Day 2.
WSOP Main Event champ Greg Raymer was an early casualty of the day's action, while former HPT Ameristar East Chicago champ Darryl Ronconi found no luck today, either. Craig Casino ran up a healthy stack for a while, but just before the dinner break, he found his top two pair cracked by the set of Jeffrey Orlowski, and he busted one hand after the dinner break.
Others to fall short of a Day 2 bag include Edward Ochana, two-time WSOP Bracelet winner Tom Koral, 2019 WSOPC Potowatomi Main Event champ Richard Bai, Mike Shanahan, and Daniel Sepiol.
The next opportunity for players to find a bag for Day 2 will be tomorrow's Day 1b flight, which will kick off at 2 p.m. local time. A third and final flight starts at Noon on Saturday, and all players that manage to bag up chips will return on Sunday at 11 a.m. to play down to the televised final table of nine. Stay tuned to PokerNews for continuing coverage as we get one step closer to crowning our first HPT champion of Season XVI!
Posted by korey729 at 12:56:00 PM No comments: 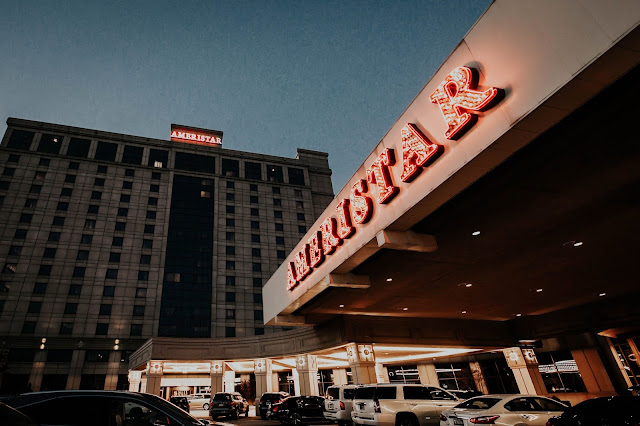 The first of three flights in the $1,650 Main Event from Ameristar Casino Hotel East Chicago kicks off today at 2pm. Players start with 30,000 chips and 40 minutes levels in this big blind ante event and registration is open until the start of level 10, or approximately 9:45pm. Players are allowed a single re-entry in each flight.

PokerNews will provide media coverage on this event all weekend long. To keep up with the action, head to PokerNews.com and find the "2020 HPT East Chicago" tab at the top under "Live Events".

This Chicagoland stop is historically one of the largest of the year for HPT. Past January events at this property have seen prize pools soar to well over $900,000. The most recent HPT winner at Ameristar East Chicago is well known professional poker player Josh Reichard. Reichard topped a field of 579 here in September to take home $186,812.

This is the first stop on HPT's Season XVI schedule and thus the first stop for players to collect points towards the Player of the Year race. Today's flight is the first of three. Flight B is tomorrow (Friday) at 2pm and the final flight is scheduled for a noon start on Saturday.

Players who advance from their respective flights will reconvene at the tables Sunday at 11am to play down to the final table. Those nine players come back Monday to play at the televised final table which will also be streamed at twitch.tv/hptpoker.
Posted by korey729 at 12:37:00 PM No comments: