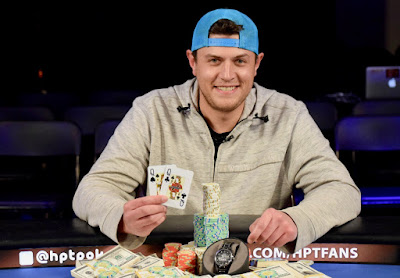 Englert was the chipleader on Day 1A, amassing more than 100k more than any other player from that flight. He stayed near the top of the chipcounts throughout Day 2, moving to the final table with 3,78 million and 2/9.

Matt Bond - the Day 1C chipleader - took control of final table play 5-handed, building a big chiplead 3-handed, eventually starting heads-up play with a 2-1 chiplead on Englert.
The two players' stacks stayed very similar the first 45 minutes, then Englert began chipping up. He gained the chiplead with the first all in of heads up play, lost it a few hands later, then the two stayed close to even the next 30-45 minutes.

John Beauprez played with only half his normal number of cards in this event as the PLO specialist captured third place for an $81,288 cash.

Charisse Case was the Last Woman Standing, finishing in 10th as the final table bubble.