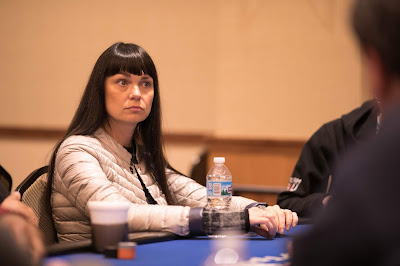 @NadyaKGB Magnus quietly worked her way through most of Day 1B in the @HPTPoker $1,650 Main Event at Ameristar East Chicago - until the last 90 minutes, that is.

Magnus began amassing chips rapidly at that point, moving to the No. 2 spot on the leaderboard as Level 15 began. She added nearly 200,000 more when her Kings held against Jacks to reach more than 500,000, securing the top spot as Day 1B came to a close.

Her closing stack of 497,000 is 8BB more than the No. 2 stack of Mark Morris, who had a wild roller-coaster of a final few levels - hitting the 460k mark a few times, while also losing up to 200k of that stack on numerous occasions.