Hughes Narrowly Bags Lead for 1A at Ameristar Vicksburg 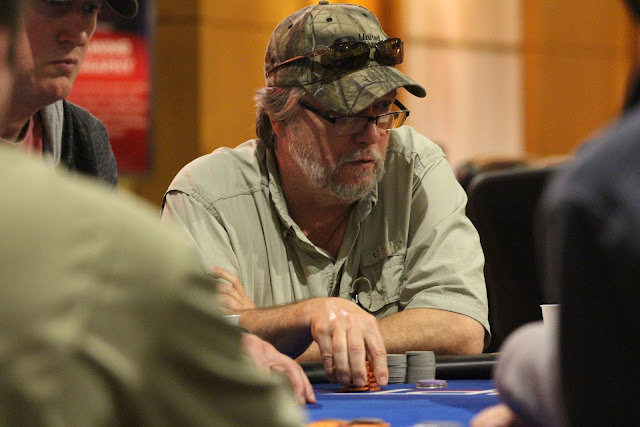 Follow along with this tournament all weekend long with reporting from PokerNews' Brandon Temple at PokerNews.com...
Day 1a of the HPT Ameristar Vicksburg $1,100 Main Event saw 56 entrants hit the felt in search of a Day 2 bag, and when the dust settled, just ten were able to make it through, with James Hughes and his 333,000 stack leading the way, narrowly eclipsing inaugural HPT Ameristar Vicksburg champ Jay Bishop and his 326,000 stack. Judge Leo Boothe was the only other player to eclipse 200,000, finishing the night with 279,000 to end the night in third-place overall, while his son Wyatt Boothe also managed to find a bag, putting 86,000 away for Day 2.
Headlining the remaining field is defending HPT Ameristar Vicksburg champ BJ McBrayer (111,000), who survived an up and down day to return to defend his title. The rest of the field includes Doug Segers (148,000), Sam Ho (141,000), JW Carter (116,000), Joseph Imarata (98,000), and Chad Chisolm (43,000).
An early storyline was the meteoric rise of Sam Cittadino, who was playing in today’s Day 1a flight after winning a cash game promotion at Hollywood Gulf Coast Casino that earned him a Main Event seat. Cittadino saw his stack grow to 150,000 in the first few levels, but just as quickly as he amassed his stack, he found himself on the rail just before the dinner break, losing the majority of his stack to Elbert “Cincinnati” Campbell.
Campbell was unable to hold on to those chips, falling just before the end of the night. Other players that were unable to secure a Day 2 bag include Corey Harrison, Shomari Williams, Jared Ingles, Ray Albritton, Alton Peterson, CT Hoffecker, Michael Monaghan, William Hendrix, Jessie Baldwin, and Rhonda Hart.
Those players, along with any newcomers, will have one more flight in which they can attempt to advance to Day 2, during tomorrow’s Day 1b flight at Noon. All players that manage to make their way to Day 2 will return on Sunday, August 11th at Noon to play down to the televised Final Table of nine. Monday, August 12th will see the final nine return at Noon and play down to a winner.

Click HERE for a full list of Day 1A chip counts.
Be sure to tune in right here to PokerNews for continuing coverage of the HPT Ameristar Vicksburg $1,100 Main Event!
Posted by korey729 at 3:12:00 AM