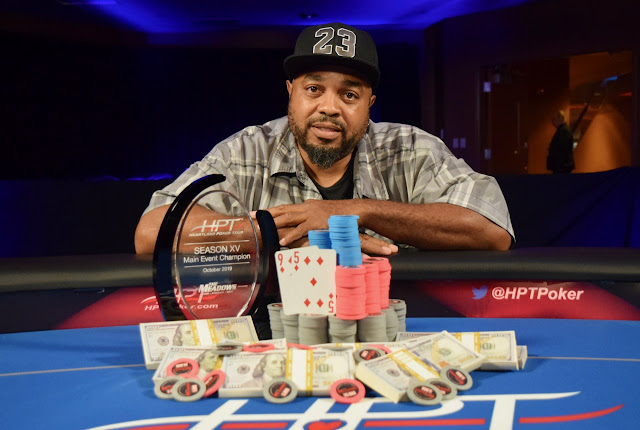 Calvin Snead went through three days of poker at @MeadowsCasino hardly losing any major hands at all, as he defeated a 266-entry field to become the newest @HPTpoker $1,100 Main Event champion.

He took a better than 6-1 chiplead in to the heads-up match against Greg Raymer and rivered two pair on the very first hand to secure the win. Raymer received $37,669 as runner-up.

The pace of play was rapid early one, with four of the players having 70 percent of the chips in play. The field was down to 5-handed in the first hour, and a double-elimination by Raymer reduced the field to 3-handed play after just 75 minutes of action.

Players took a short break, and a few hands after that was a huge pot with Davis Santucci moving in with Ace_Queen, Mike O'Neill over-the-top with Jacks and Raymer calling both stacks with Kings. Raymer flopped a set, scored two eliminations and took the chiplead.

The pace slowed substantially three-handed as each player had 70BB or more. More than two hours went by three-handed before Snead eliminated Frank Bonacci ($25,432) to take the big chiplead heads-up against Raymer.

The next stop of the HPT Season XV Tour is Oct. 17-28 at DAytona Beach Racing and Card Club in Florida.