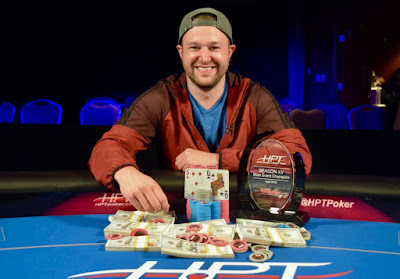 Play was not what typically for a main event final table, as the exceptionally short stacks held on for what seemed to be forever. At one point 7-handed the three small stacks combined for just 14BB, and each of those players doubled at least once after that point.

Wagner - chipleader to start the day - fell to 2BB, doubled, fell to 2BB again and even chopped a pot before finding his footing and working his way back. During heads-up play, Wagner doubled through McIe five different times before taking the lead, then winning the title by defeating McIe on the only all-in where he was ahead in chips.

McIe constantly had Wagner needing help to survive and was unable to get flops that held. Wagner did hit quads on one double-up, however, during the 5-double-up run. McIe earned $48,215.

Lydia Waltonbaugh had the crowd behind her throughout the final table, finishing in third place, cashing for $32,287.

Jason Pickup had a miserable run after the blinds reached triple-digit. He doubled up Wagner three times, McIe once and Waltonbaugh once. The final double-up left him with only 1/2 of a SB and he went out in 4th.

Marcus Gaunt twice fell to just 2BB, doubling once and being eliminated the second time in 6th place. Tyson Lee was below 5BB for an extended period of time before being eliminated in 7th place.