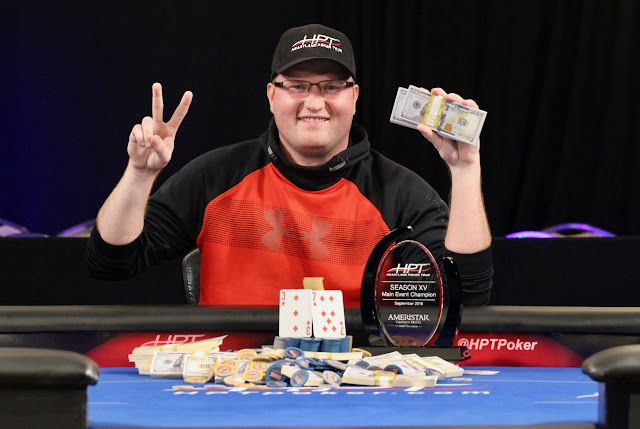 Josh Reichard was the top stack for much of Sunday's Day 2 play in the HPT East Chicago Main Event. He started today's final table as the No. 2 stack, grabbed the lead within 30 minutes and never looked back en route to a $186,812 cash and the victory.

Reichard also earns a $3,500 package to the Season XV HPT Championship where he'll be looking for back-to-back wins, as he won the Season XIV title last November here at Ameristar East Chicago.

A big hand early at the final table against Mike O'Neill pushed Reichard to a big chiplead and he kept pressure on all stacks from that moment forward. He defeated David McDermott heads-up for the title, with McDermott earning $115,406 as runner-up.

Reichard had close to a 2-1 chiplead to begin heads-up play, the stacks stayed even for the first 15 minutes, then Reichard went on a constant run of chipping McDermott down until the match was complete.

McDermott became a major player when he picked up Aces and earned a double-elimination of Brett Apter (5th, $38,192) and Henry Zou (6th, $29,640) to move the field to 4-handed play, turning around quickly after that and eliminating start-of-final-table chipleader Mike O'Neill in fourth place ($52,555).

O'Neill picked up the day's first elimination, with Michael Koh cashing in 9th for $16,605. Reichard took out the next two players - Nick Budzakoski in 8th ($20,757) and Kevin Albers (7th, $24,908) before McDermott eliminated the next three players.

Three-handed play took a while before Eddie Blumenthal was short-stacked and Reichard eliminated him ($75,637 cash) to get the heads-up match started.